I’ve been thinking I should probably post something about Christmas in Nepal, similarities, differences and all that.  Truth is I haven’t really wanted to write anything at all lately or for that matter do anything at all lately.  I’ve been nursing a mild to moderate case of culture shock and couldn’t bring to myself to write objectively on culture, Christmas or much else.

I was hesitant to self-diagnosis as culture shock mostly because I’ve never really liked that term.  To me it some how implied that one would be shocked by differences in culture.  Of course culture is different! Isn’t that what makes discovering it and experiencing it so much fun?  It is like ‘Cinderella Syndrome’ for culture. I considered culture shock something ‘good travellers’ didn’t get and I thought myself well read, well-travelled and well prepared enough not to be shocked by culture.  But… the give away that I was in fact suffering from culture shock was that my temporary mental downturn happened to coincided with three weeks of the internet being down, boxes missing from the post office and numerous other cultural frustrations. Freak out!! I guess culture shock happens to the best of us and I am happy to report, that I am a recovering culture shocker and I’ve come around enough to give a not entirely bitter and cranky view of Christmas in Nepal.

Christmas in Nepal is not the pinnacle of holidays as it is in America.  In fact the only people who celebrate Christmas in Nepal are those who actually care that Jesus was born.  I thought this might make it more holy, like an actual religious holiday and not only a seasonal event.  There was enough of the familiar around, flagrant consumerism and Christma-kitsch, to make it seem like a holiday was happening, but not as overwhelmingly overdone as it is at home.  I thought this would lead to a more quite holiday, more spiritual like, more focused on faith and less on stuff.   I wanted to feel a Divine pat on the back that I had celebrated rightly, instead of having indulged in the western cultural Christmas hoopla, that I always feel slightly guilty for afterward.

Truth is, it was just another day.  We attended church, we exchanged gifts, we sang and ate and did all the normal things, as normally as we could here.  It wasn’t anymore holy than usual, I didn’t feel all that more spiritual and I got no Divine pat on the back.  I wasn’t sure if it was my case of the culture downers, the difference in celebration, missing family and familiar, but Christmas was just missing that something sacred.

A week before Christmas Dave and I had a chance to sneak out on a rare childless date and we visited Swayambhunath, another of Nepal’s World Heritage Sites and holy Hindu and Buddhist place. 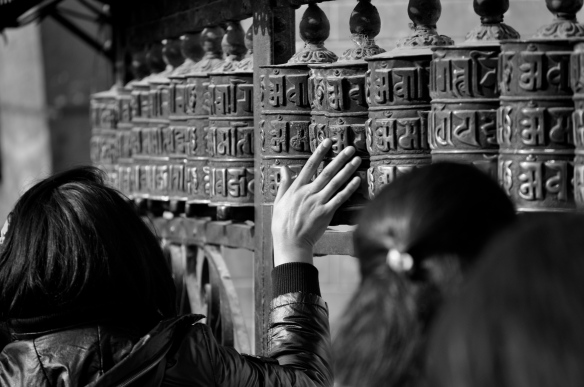 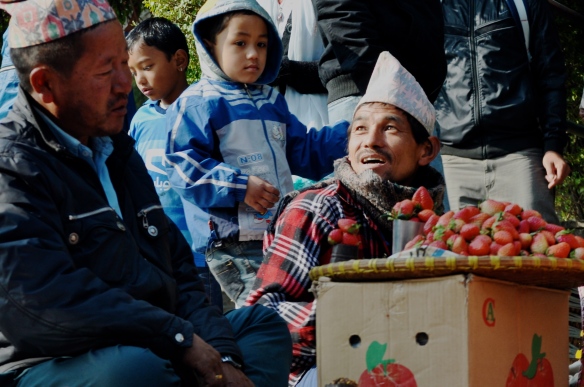 The architecture was wonderful, the history was deep and the bright colors and bright people gave us camera candy for the afternoon, but we both admitted as we walked away, we were a little underwhelmed.  Perhaps that was because it is the fourth or fifth holy site we have visited and though beautiful they are fairly similar.  Perhaps it was because the place was overrun by monkeys, which give it the nickname ‘monkey temple’. Maybe it was because along with the monkeys come, monkey poo, overturn trash bins, and food scraps everywhere.  It could also be that there were massive amounts of food, souvenirs, and other stuff vendors all entreating you to buy, buy buy.  Though a holy site it is also a tourist site and people had come just to check it out like we were and not necessarily there to worship.  People were staring, talking, buying food, purchasing coins to throw at the fountain and candles to light on the alters.  They were laughing, eating, feeding monkey and occasionally spinning prayer wheels.  Maybe I just wasn’t in the right mood but the whole experience seemed to be missing the something sacred.

So I had been moping around, stuck in this weird place of cultural adjustment wondering if there was any way to worship without it being routine, any way to celebrate without it being commercial or a way to connect with the Divine that we humans haven’t distorted.

The day after Christmas we went for a hike.  We had the day off classes and school and decided to tackle a hill that Dave had been wanting to for a while.  The hill is the highest point on the rim on the Kathmandu valley (though we didn’t actually make it to the highest point).  We walked along the ridge, children in tow, or rather me in tow as I seemed to be bringing up the rear most of the time.  There were several steep, hand and feet climbs and steeper, knee burning descents and gorgeous, gorgeous views of the Himalayas, Annapurnas and the entire Kathmandu valley.  I was stinky, sweaty and sore but I finally had a relief from the cultural blasé.  As Terry Tempest Williams wrote, “To be whole.  To be complete. Wildness reminds us what it means to be human, what we are connected to rather than what we are separate from.”

There, in the ‘wildness’ of our post-Christmas hike, I finally had that feeling of the something sacred.  I finally felt that Divine presence that the Christians seek to know, the Buddhists attempt to achieve, and the Hindus attempt to appease.  I was looking down on the valley of 5 million people, and the mountains and hills that surrounded them and felt the connection to the Creator who made it all. It really was a killer hike, my calves were sore for two days afterwards.  I’m still a little disgruntled at how cheesy spirituality can be sometimes, and don’t quite have the answers about how to do it right, but I walked out of the hills that day feeling like I had just celebrated Christmas.

As always check out our photo page for more pics of the monkey temple, Christmas and hikes.  Dave also wanted it to be know that my melancholy mood was really my own and he had an enjoyable and spiritual Christmas here in Nepal.

7 thoughts on “The Something Sacred”